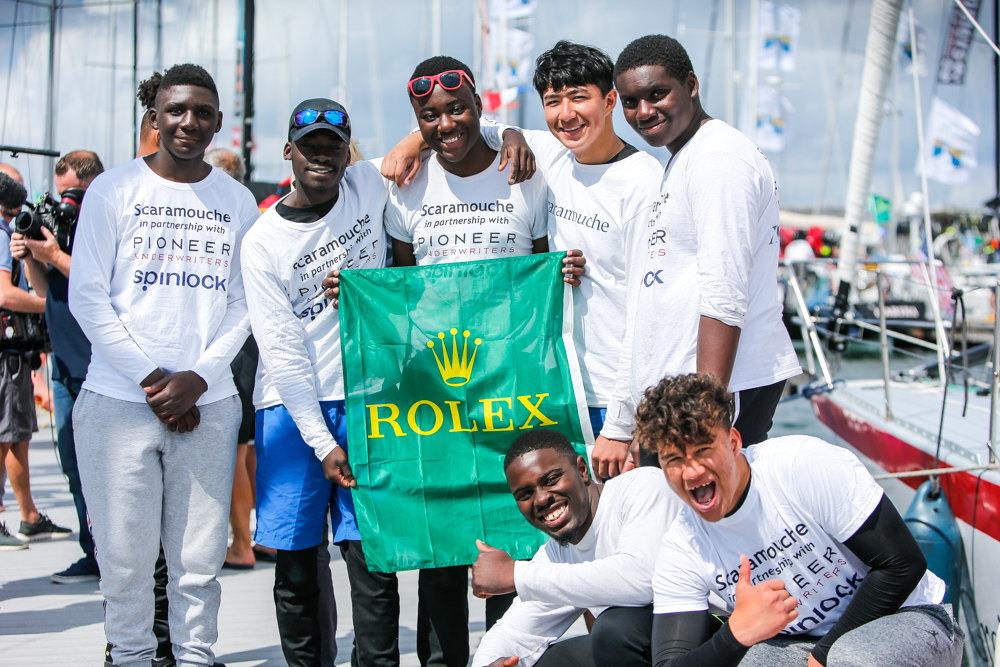 The Scaramouche Sailing Trust, set up to restore a 1980s classic American Admiral’s Cup yacht, and close to the heart of the Yachting Journalists’ Association has appointed a new board of Trustees: Alex Jacobs, Allie Smith, Andrew Pindar and Damilola Ajaboona to help bring bring a wealth of knowledge and support to take the charity to the next level and transform more lives through sailing.

The yacht first came to the attention of the YJA in 2017 when when 17-year-old Tottenham schoolboy Montel Fagan-Jordan won the YJA’s Young Sailor of the Year title in recognition of his leadership in first raising the money to restore the 1980s classic yacht, then leading a crew of fellow students from the Greig Academy in Tottenham to compete in the 605 mile Fastnet Race.

Since 2014 Jon Holt, Head of Sixth Form and Outdoor Education at Greig City Academy, has led an extraordinary group of people to develop and lay the foundations of this unique school sailing project. It soon became very clear that the work they were doing was transforming the lives of the students that took part and securing its future was paramount. The Scaramouche Sailing Trust was established and, in 2019, became recognised as a UK charity.

“I’m thrilled to welcome the new Trustees to our board,” comments Jon Holt. “They bring the range of skills and experience we need to build the Scaramouche Sailing Trust into a sustainable charity. It is the obvious next step and consolidates everything we have achieved so far. We very much hope to be able to us inspire many more state schools to benefit from the incredible opportunities of sailing.”

Allie Smith and Andrew Pindar, known to many in the sailing world bring a wealth of knowledge and shared experiences to the charity.

Allie has been part of the Scaramouche journey from the start. Skilled in events and logistics having worked alongside many eminent UK sailors, Allie prepared Scaramouche for her original Fastnet Race campaign. As a qualified Skipper and having raced around the world, Allie is ideally positioned to guide the sailing programme, while also inspiring the girls’ side of the project.

Andrew is an avid and hugely respected supporter of sailing campaigns. His name has been linked to Emma Sanderson (Richards) MBE, the late quadriplegic sailor Hilary Lister, Olympic Gold Medallist Hannah Mills and many others including the whole US Sailing Team. His unrivalled experience and network are huge assets to the charity.
Damilola is perhaps closest to the project as a former pupil of Grieg City Academy. He has worked alongside Jon Holt, and knows first-hand what sailing and outdoor education as a whole can offer students from inner-city London schools. He is able to link the practical elements of the charity’s activities with educational aspects that are not available in the classroom.

Allie, Andrew and Damilola are led by Alex Jacobs, who chairs the board. He has over 25 years’ experience of working in charities, including supporting many start-ups. He shares a passion for sailing, as a keen Laser sailor, and is located near to Greig City Academy. Alex guides the Trust helping to strategically position it for the challenging seas that lie ahead.
The Scaramouche Sailing Trust is the official charity of Cowes Week 2020 and has recently announced DUAL Group as a new partner. The charity continues to look for major founding donors, as well as those who feel they can financially contribute a small monthly amount. The work of the Trust depends wholly on the generosity of donors. Those interested in contributing to this important education sailing project can make donations directly at https://scaramouchesailing.org.uk/get-involved/