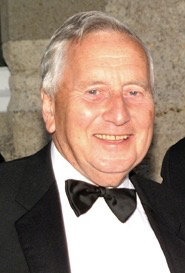 A distinguished journalist and authority on power boat racing, Ray Bulman, a long time supporter of the YJA, has died at his home in Cowes.  He was 89.

He had been a member of the YJA for more than 40 years.

Ray wrote principally for the magazine Motor Boats and Yachting but also for the Daily Telegraph and other publications and it was through his expertise in the powerboat world he became an acknowledged authority on powerboat racing. His early career however saw him writing about boats in London.

His death on New Year’s Day was marked by a tribute published in Motor Boats and Yachting which said : “It was a mark of Ray’s brilliance as a writer and raconteur that he was just as happy making fun of himself as he was recounting tales of the many colourful characters and celebrities he rubbed shoulders during power boat racing’s heydays in the 60s, 70s and 80s.

His original MBY column ran for 21 years until 1990 and just five years later he was invited back again to write a retrospective column about the joys of traditional motor boats which ran until 2010.Ray joined the YJA in 1975 and was a regular supporter of its events.”