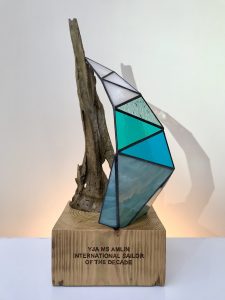 ounce the Shortlist for the YJA MS Amlin ‘International Sailor of the Decade’.

Over the past decade we have seen a cohort of exciting personalities rise on the international stage, with the established ‘household’ names continuing to enjoy sailing and meet the challenges being thrown down by the younger generation. Alongside the racing performers, we have seen others influence participation in sailing, inspiring more people to enjoy being out on the water.

The YJA MS Amlin ‘International Sailor of the Decade’ aims to recognise the achievements of those who have had the greatest positive impact on our great sport and pastime.

The YJA chose to commission Jo Munford of Seaview Studio, and asked her to create a unique trophy to celebrate the award, which the recipient will keep.

Jo said about creating the trophy: “I was really excited to be asked to make the trophy, as I love creating sculptural pieces using stained glass and driftwood.  The brief was perfectly aligned with my style, including the use of salvaged materials.  The finished piece is meant to evoke the feeling of the sea and yachting, with the end impression in the eye of the beholder; a spinnaker and main sail or a cresting wave with sea spray in the sea glass detail?”

Mark Jardine, Vice Chairman of the YJA said: “Throughout the design and construction process I could see that Jo understood exactly the idea we had for the award. The driftwood mainsail reminds me of the Organ Pipes at Cape Raoul, Tasman Island which the Sydney Hobart fleet pass on their way to the finish in Tasmania. The YJA MS Amlin ‘International Sailor of the Decade’ trophy is a striking sculpture which we hope the winner will cherish and have on display for years to come.”

With many names put forward by people around the world, these are the shortlisted sailors:

Dee Caffari – A constant feature in major races as well as pushing boundaries in terms of female equality. Chair World Sailing Trust, helping teach Omani women to sail, Turn the Tide on Plastic, and a long list of achievements, notwithstanding sailing around the world six times.

Sir Robin Knox-Johnston – His personal achievements and world records have inspired many thousands to take up the sport, not just through the Clipper Race he founded. He has advised all aspects of the maritime industry from being involved with Trinity House as an advisor, to the Cutty Sark Trust and more. Recognised around the world for his successes.

Jon Holt – The founder of the Scaramouche Sailing Trust, which really has broken down barriers, allowing people of all backgrounds to sail and race successfully. A shining beacon in sailing.

Sir Ben Ainslie – During the last decade he became the most successful Olympic sailor in history with medals at five consecutive Olympics including his 4th gold medal in 2012. In 2013 he was pivotal in helping the BMW Oracle Racing Team retain the America’s Cup, joining the boat as tactician when rivals Emirates Team New Zealand were one race from victory.

Andrew “Bart” Simpson – An Olympic Gold medallist at Qingdao 2008, Silver medallist at London 2012 with Iain Percy in the Star class, then tragically killed in training for the 2013 America’s Cup. After his death the Andrew Simpson Foundation was established, as well as events such as Bart’s Bash, to encourage future generations out on to the water and discover a love for sailing.  An already hugely successful quest.

MS Amlin Boat Insurance Business Development Manager, Paul Knox-Johnston said, “Wow, what an amazing line up of talent we have been presented with! Not only a true reflection of what these great sporting ambassadors have achieved in sailing, but also how they have also made a huge imprint on the world around them across the spectrum. I do not envy the YJA members having to make their decision – this is an extremely hard list to pick a winner from.”

Yachting Journalists’ Association Chairman, Cliff Webb added, “Fittingly, we received nominations from all around the world for this award, one designed to recognise the remarkable contribution and achievements of the nominees. These 5 final nominees were selected due to the impact and influence they have made on the sport in this time. Now it is down to our YJA members to select the winner later this month.”

The awards will be streamed worldwide via social media and on the major sailing news platforms in late November.

A link for YJA members to cast their votes will be circulated shortly.