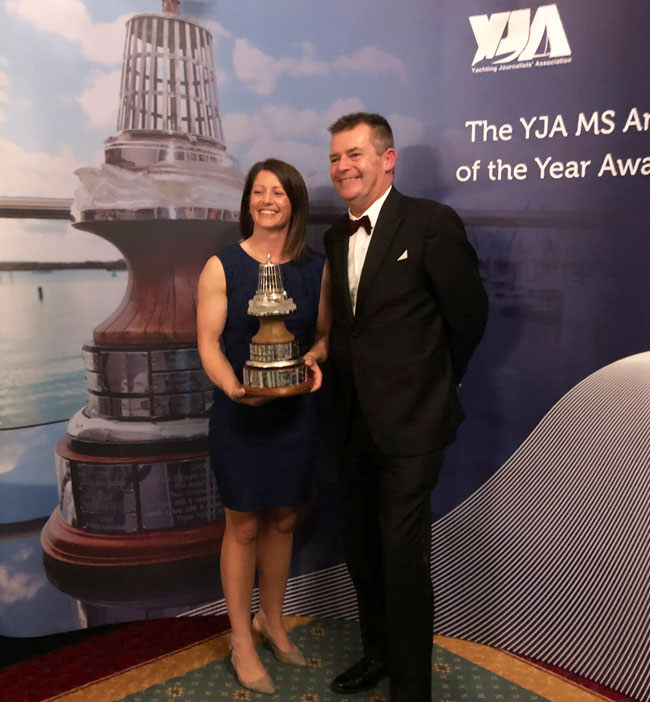 The YJA MS Amlin Yachtsman of the Year and the YJA MS Amlin Young Sailor of the Year Awards were presented during a Gala Dinner at the Grand Café Southampton on  September 13, following on from Press Day at the Southampton International Boat Show. The event drew together the great and the good of the marine world, distinguished guests and many previous winners of the awards.

The evening started with drinks in the Grand Lobby, followed by the 160 guests being invited through to the Grand Café to enjoy a sumptuous meal, leading into the awards themselves.

Guest presenter for the evening was triple round the world yachtsman and the star of Channel 4’s ‘The Mutiny’ Conrad Humphreys with the 2018 winners’ invited to the stage to present the main awards during coffee.

First up to the stage to join Conrad were Clifford Webb, Chairman and Mark Jardine, Vice Chairman of the Yachting Journalists’ Association, and Keith Lovett from the evening’s hosts, MS Amlin Boat Insurance. Cliff talked about the new format for the awards, followed by Keith on MS Amlin’s support of the event and people involved in boating, then Mark described the growth and future direction of the YJA.

Then it was on to the awards themselves, starting with the MS Amlin Seamanship Award, presented by 2018 winner Sean Rose. The trophy, previously awarded for acts of seamanship in the Round the Island Race, has been extended worldwide in 2019, this year being presented to Roy Disney, the owner of Pyewacket who rescued the team on John Sangmeister’s Santa Cruz 70 OEX during July’s Transpac 50 Race after they were forced to abandon ship due to water ingress from damage to their rudder post.

Roy Disney, who travelled over (from where) especially for the evening said:

“Offshore sailing is a lonely sport ultimately. People see you at the start and the finish and they don’t see what happens in the middle. This event and these awards make people aware beyond the sailors themselves, which is important. It’s critically important that we all watch out for each other and we all know in the back of our heads that things like that can happen. We didn’t give what we did in the situation a second thought, and I’m sure that if it was the other way around, that boat and team would have done the same for us. When we go out to sea, we want to have that thought in the front of our head.”

Next up was the YJA MS Amlin Young Blogger of the Year Award which was presented to Alex Rabbitt, who produced a fabulous short video story, filmed over a year, which is about the experience a group of youngsters went through in passing their sailing instructor course in Manchester, called ‘Journey to Instructor’.

Alex described creating his blog and reaction on winning the prize of a GoPro action camera and membership of the YJA:

Moving on to the YJA MS Amlin Young Sailor of the Year 2019, video highlights were shown on the big screen to the guests:

Conrad invited the 2018 winner Emily Mueller to the stage to open the envelope and reveal the winner as Matilda Nicholls. Unfortunately, but unsurprisingly given her passion for sailing, Matilda was away training on Lake Garda, so her father Ben came up to the stage and accepted the award on her behalf.

The final award of the evening was the big one – the YJA MS Amlin Yachtsman of the Year 2019. Initiated in 1955 by the late Sir Max Aitken, a Battle of Britain spitfire Pilot and chairman of Express newspapers. Again, video highlights were shared with the audience:

Tracy Edwards and Nikki Henderson – the first time this has happened in the history of the event. Conrad invited Nikki to the stage to present the award to Lucy MacGregor – four-time winner of the Women’s Match Racing World Championship after her victory at the Lysekil Women’s Match in August. ‘Team Mac’ took the final 3-0 against French skipper Claire Leroy.

Guests then socialised, celebrated and danced well into the small hours.

“It’s been a wonderful event and marvellous to see past winners, key members of the marine industry, many YJA members of course and the guests of MS Amlin, who I hope have enjoyed the evening. It has been a year of transition for the Yachting Journalists’ Association and I think it’s onwards and upwards from here!”

MS Amlin’s Paul Knox-Johnston, who was instrumental in the organisation of the evening said:

“It’s been a fantastic occasion, we’ve seen so many famous names of the yachting world in one room. A superb awards ceremony with entertaining and enlightening speeches, a great atmosphere throughout – what has there been not to like about the evening? I’m hoping this can continue for many years to come.”

“It’s been incredible. What a privilege to be standing in front of so many friends, esteemed colleagues and legendary sailors. In many ways I was quite surprised to be asked and what a thrill, honour and challenge it has been, as being in front of your peers in this environment is tough. The YJA MS Amlin Yachtsman of the Year trophy is regarded as iconic to win. If you look at who has won it over the years, and then you look out and see those names around you, it’s a unique experience.”

“With the YJA MS Amlin Yachtsman of the Year I have the connection and affinity with it as my uncle has won it four times, and it is the pinnacle, the Oscar of the yachting world – the one everyone wants to win. From MS Amlin’s point of view, this is an event we’re hugely proud to be part of. It’s been great to see everyone here having a good time, enjoying their food and their evening. What a great night!”

Amongst the many past winners who were present was Ian Walker, double Olympic silver medallist and winner of the 2014-15 Volvo Ocean Race, who was enthusiastic about the new format for the award ceremony:

“First and foremost, it was great to be invited! I had a great table and was sat with Harold Cudmore, who’s never short of a story or two. When I was 17 he was skippering the British America’s Cup team in Fremantle and everybody believed we could win the America’s Cup because of him. He’s somebody I’ve looked up to, and still do, and what a great opportunity it was to chat with him. These kinds of conversation were going on all over the room and it was good to see the event had the gravitas that it deserves – the YJA MS Amlin Yachtsman of the Year is the most prestigious award you can win. It was a great evening, great fun and an honour to attend.”

Mike Shepherd of the MAA who produce solutions for marine companies’ PR said of the evening:

“This event showcases the people who work so hard to succeed. You can’t win these awards without doing something pretty amazing, having put a lot of time and effort in. They’ve probably been to hell and back to get where they are now. It’s incredibly special and it was so exciting to be here and see who had won.”

The Yachting Journalists’ Association is hugely appreciative of MS Amlin Boat Insurance for their sponsorship of the awards. Their support has enabled the presentation to be held during an event which befits the stature of these historic trophies.

Video highlights from the evening