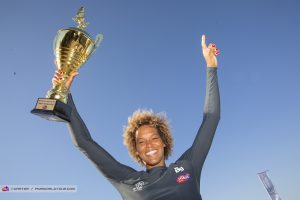 Heading into the final day, Marion Mortefon (FRA | Fanatic / Duotone / LOKEFOIL) and Helle Oppedal (NOR | Fanatic / Duotone), were the only two women left in contentions for the Women’s Foil event title, by the end though it reached an anti-climatic end as Oppedal, for the first time this week, failed to qualify for the Winners’ Final, meaning that Mortefon would be crowned champion, no matter what happened in Elimination 4, with the discard coming into play.

Mortefon has been incredibly consistent all week – not finishing outside the top 3 (1 victory and two, thirds) – until today when she still finished 4th, so she thoroughly deserves to earn her first Foil victory. 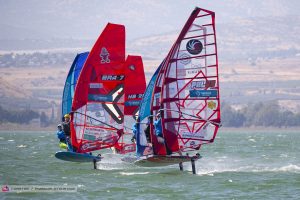 Coming into the final day, Oppedal had won the last two races and a top two result in Elimination 4 would’ve guaranteed her the event title – however it wasn’t to be on this occasion. The young Norwegian was in the qualifying positions for much of the semifinals, but couldn’t quite hold on – just missing out in 5th. This week still represents an amazing result for her and there is now a new face firmly on the scene as she walks away with a superb second place.

Blanca Alabau (Starboard / Severne Sails / Starboard Foil), also missed out on a place in the last Winners’ Final of the week, but she held on to the final place on the podium, to claim her first event top 3 on the world tour.

Just as in the Foil, the Women’s Slalom also proved somewhat of an anticlimax with second and third-placed – Marion Mortefon (FRA | Fanatic / Duotone) & Delphine Cousin Questel (FMX Racing / S2Maui) both jumping the gun in Elimination 7 to all but gift Sarah-Quita Offringa (Starboard / NeilPryde / Maui Ultra Fins) the victory. However, even with the event victory in the bag, Offringa showed the heart of a lion to come from miles back, once again, to deny another girl their maiden bullet on the world tour. This time it was Tuesday-Lou Judd (Phantom / Phantom Sails), who would succumb to Offringa in the dying metres. However, once you look at the result across the board, it starts to make more sense why Offringa pushed so hard, for a seemingly pointless victory, given she had already won the event. The 29-year-old is never one to be outdone and by winning the 7th elimination, she too walks away from the event boasting a perfect score of 3.5 points – matching a certain Nicolas Goyard’s record this week. 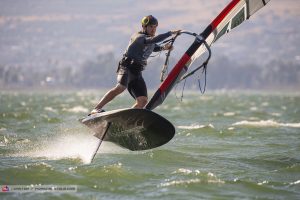 With the event victory already secured,  Nicolas Goyard enjoyed a stress free, victory lap, final day. The 25-year-old has been a cut above all week and deservedly walks away with the event victory and with it the world title lead. The final day was all about the fight for the podium positions with the 2nd-6th place sailors still fighting for the prestigious top 3. However, that fizzled out too with Pierre Mortefon (Fanatic / Duotone / LOKEFOIL) and William Huppert (Fanatic / Duotone / LOKEFOIL) both locking in their second and third places from the overnight rankings.

Mortefon had been extremely consistent in the opening three days without ever really catching the eye. However, the reigning Slalom World Champion finished the event extremely strongly. Having won Elimination 6 on the fin, the 31-year-old capped off a great performance by claiming a dominant victory on the Foil in Elimination 7 to finish 6.6 points ahead of Huppert.

Huppert, had to survive a few nervy moments on the final day after dropping his opening gybe in the Winners’ Final of Elimination 7 when well placed, but thankfully for him, Maciek Rutkowski (FMX Racing / Challenger Sails) was unable to win the elimination, so the 26-year-old’s 7th place proved more than good enough to earn him a thoroughly deserved first podium on the world tour. Huppert has sailed amazingly all week – only missing out on two Winners’ Finals – and never finishing outside of the top 16 and he can now enjoy all of his hard work training over the last 18 months.