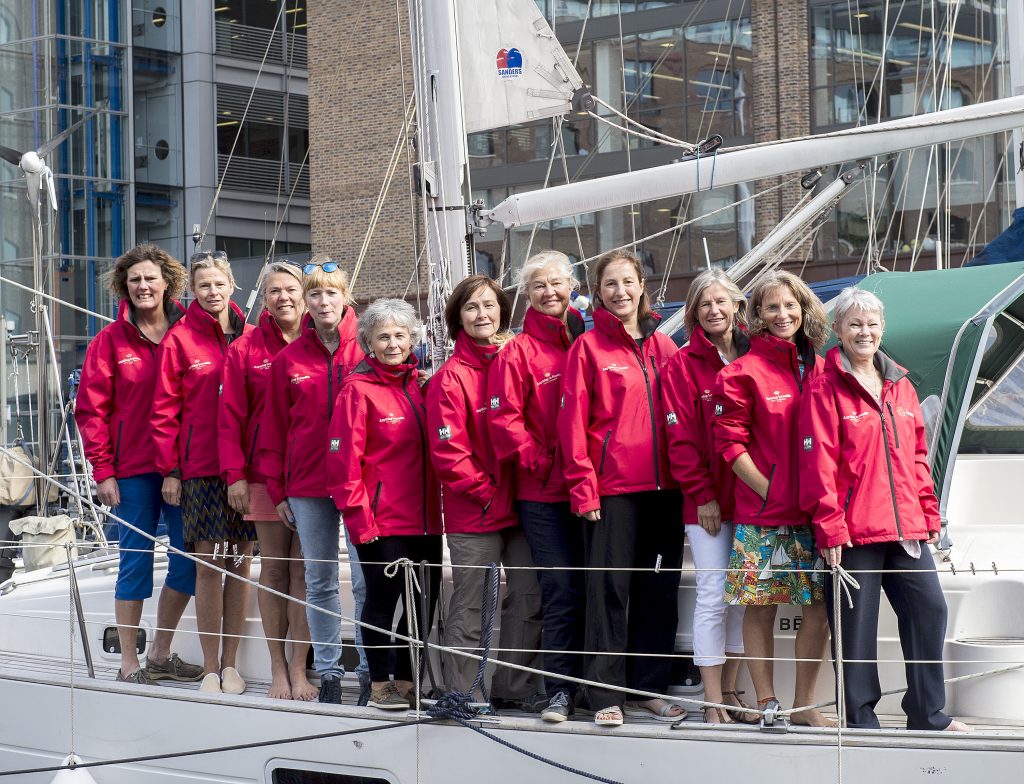 Yachtswoman, Tracy Edwards MBE, the first woman to hold theYJA Yachtsman of the Year title, is reuniting her legendary Maiden crew for the first time since 1990 when they became the first all female  team to sail around the World and into the record books

The crew gained acclaim for their successes in the Whitbread Round The World Race in 1989-90,  where they defied expectations and shattered glass ceilings; setting the best result for a British boat since 1977, which has remained unbeaten to this day. Their incredible story is currently being turned into a new documentary, produced by New Black Films. In honour of their reunion, the renowned sailors were treated to a private screening preview of the film currently in production, among family and friends at BAFTA in London. A story about guts, courage and determination, the documentary is set to chronicle the team’s 167-day, 32,018-mile journey around the globe, where they overcame icebergs, a tornado and five days without food. Their achievement shattered stereotypes, broke  records and paved the  way for women in sport and beyond.

Tracy, Maiden’s Skipper, said: “Today, for the first time since the end of the Whitbread, the Maiden crew are reunited.  We spent nine months together during the race and shared a truly unique experience and bond.

It has been wonderful to get back together and share  our stories and enjoy watching a preview of the  forthcoming documentary.

“Back in 1989 many people did not believe that a group of women sailors could take on such a notorious challenge, and many wrote off our chances. We not only completed the race but did so in an impressive time, coming second in our class, ahead of many all -male crews. Our  accomplishment  reached beyond the world of sailing showing that with the right support and  plenty of belief, women can do anything. ”

“Over the past 30 years, the opportunities available to women have been evolving for the better.  However, there is still so much to be done. Thanks to the generous support of  HRH Princess Haya’s  global initiative: ‘Anything is Possible’ , which supports and inspires the best in people, Maiden will set sail again this September, promoting and campaigning for educational equality across the globe.

We hope the next chapter in Maiden’s story will inspire  and empower a new generation of young girls to fulfil their dreams and reach their potential.”

Maiden will set sail later this year from Southampton to Jordan on the first leg of her three year world tour raising awareness for girls’ education. Maiden is  currently still in production stages and is  scheduled for release later this year

Tracy made history in 1989/90 as Skipper of the first all female team to compete in the Whitbread  Round The World Race. Her  accomplishment was recognised by the Queen when she  was awarded the MBE. She also became the first woman to be awarded the YJA’s Yachtsman of the Year Trophy.

She is currently restoring her beloved yacht, Maiden and will be taking her on another tour with a

The foundation’s mission is to empower and educate girls. The charities it supports develop community led sustainable programmes which provide opportunities for girls to meet their potential.

Through funding, it aims to make a significant difference to girls around the world, advocate for equal human rights, and enable girls to access the basic human right to an education.  ‘Anything is Possible’, a global initiative which will support and inspire the best in people. The initiative set up by HRH Princess Haya Bint Al Hussein honours the legacy of her father, HM King Hussein I, who believed that with faith, honour and courage ‘Anything is Possible’. While less than a year old, AIP has already inspired people to realise life-long goals and tackle what they previously believed impossible.

AIP supported a successful summit attempt of Mount Everest and is now championing a three-year global voyage by Maiden, a boat famed for carrying the first  all female team to sail around the world  and into the record books.