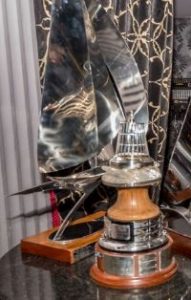 The nominees are decided for the most prestigious awards in British boating, and the voting period is now open for the 2022 YJA Yachtsman of the Year, and the YJA Young Sailor of the Year.

The voting period closes at midnight (GMT) on Saturday 14th January 2023, so ensure you cast your vote as soon as possible.

As always, ONLY YJA members may cast their votes – this is NOT open to the general public.

2022 Nominees for the YJA Yachtsman of the Year

Hattie Rogers – Her win at the SailGP Grand Final in the Waszp class was exemplary and her sailing onboard the F50 with Sir Ben Ainslie made headlines around the world. She is the face of the foiling generation, and is an integral part of the Athena Pathway Programme in the ETF26,  and anyone who saw the SuMoth challenge boat that she competed in at Foiling Week knows that this is a rare talent indeed. https://www.sailweb.co.uk/2022/03/28/sailgp-hattie-rogers-wins-inspire-racing-x-waszp-series-in-san-francisco/

Dylan Fletcher-Scott – the 49er gold medallist in Tokyo, this year he won Moth World Championship against the best in the world including many America’s Cup sailors, and has quickly risen up the table in the Star Sailors League since joining. https://www.yachtsandyachting.com/news/256623/Moth-Worlds-at-Buenos-Aires-Argentina-overall

2022 Nominees for the YJA Young Sailor of the Year Award

Joe Rowe – In January 2022 he set his focus on the Topper Worlds held in Italy on Lake Garda. In a highly competitive fleet of 144 other boats, he qualified for the two-day final series in 6th place. On the first day of the gold fleet racing he scored 2nd, 24th and 1st which took him to second overall on the last night. On the final day, only one race was possible and his 13th place bought him to equal first on points, but his previous day’s first place gave him the win on countback. A magnificent achievement by the 15-year-old.

Charlie Dixon – IQ Foil. Competing in his first ever international event at the age of 17, he cleaned up in the male iQFOiL class at the Youth Worlds in The Hague, notching up eight wins from 11 races to seal the title by a staggering 26 points. He then  won both the European and class world titles, this after winning the RYA Youth National Championships in April., Then he won the iQFoil International Games in Lake Garda, Italy and was crowned iQFoil U19 male World Champion in Lake Silvaplana, Austria.

Kai Hockley – his commitment and dedication to be the best sailor he can be against all the odds. This year he competed in the ICLA Nationals in his Laser and also helmed a Etchells in the Worlds’ in Cowes, lining up against some of the best in the sport. All this with the available equipment that the Scaramouche charity can afford, and yet he remains completely undeterred and prepared to do his best, a real role model.

Arrangements for the presentation of the awards will be announced in due course.